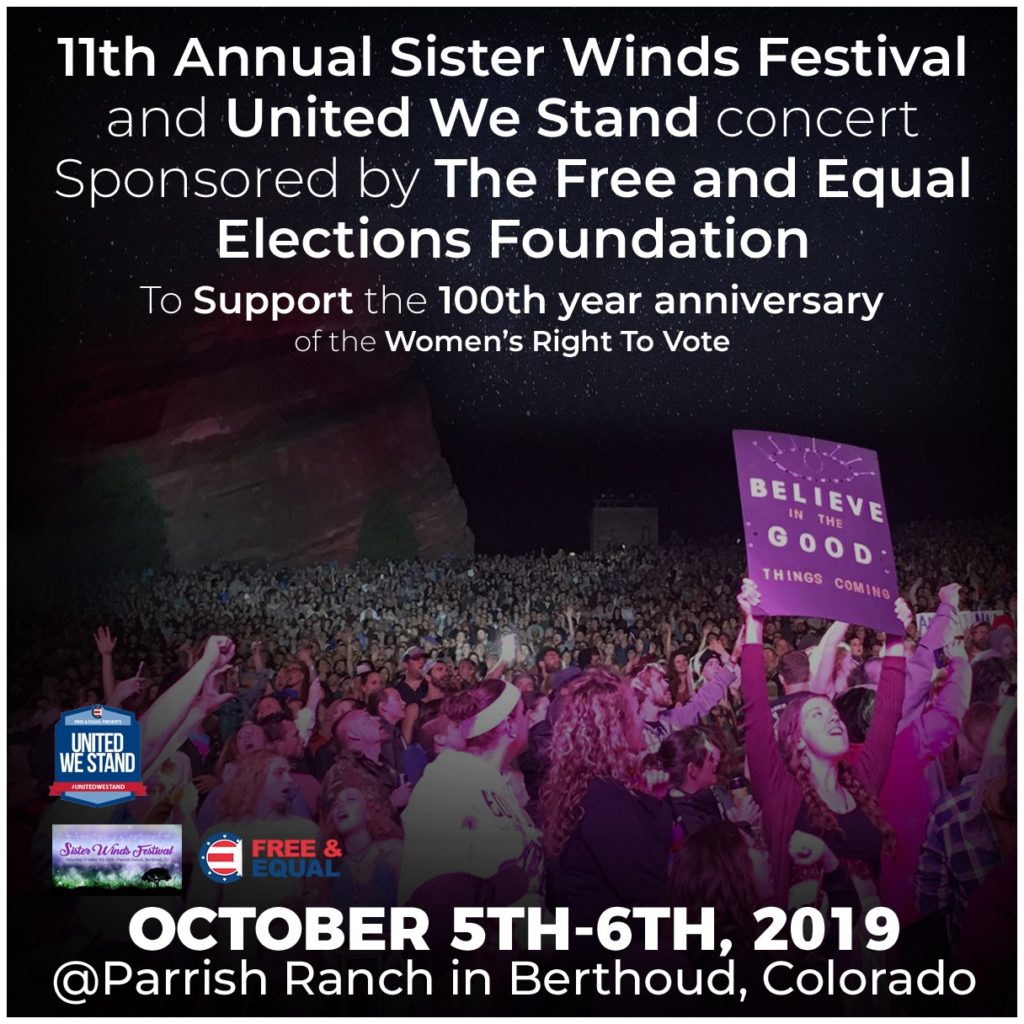 Celebrates the 100th Year Anniversary of Women’s Right To Vote

About the Festival
The 11th Annual Sister Winds Festival is an intentional gathering celebrating the divine feminine through women-led music, mindfulness and movement. The festival is a two-day one-night, substance-free, gender-open family gathering which includes live music, workshops, and a kids village. Held at Parrish Ranch in Berthoud, Colorado, the land offers a beautiful natural setting with trees, a running river, and grassy areas. Camping, lodging, and RV hook-ups are available for the event.

The festival is sponsored by the Free And Equal Elections Foundation. It will be the third stop of the national non-profit’s 2019 United We Stand Concert Tour in celebration of the 100th year anniversary of the women’s suffrage movement.

Hip hop artist Bethy Love Light will serve as MC of the event.

More workshops will be announced on the festival Facebook event page. https://www.facebook.com/events/290750948536934/

The Rainbow Lightning Kids Village will provide activities with parent accompaniment, as well as workshops available for dropoff.

The festival ticket price includes vegan meals on Saturday night, as well as Sunday breakfast and lunch created by King of the Kitchen, Papa Leo Baldonado. The festival is an eco-friendly, family-style gathering, so guests are asked to bring their own plates and utensils.

Tickets may be purchased at the Sister Winds website: http://sisterwinds.com/.

About Free and Equal Elections Foundation

The mission of the Free and Equal Elections Foundation is to broaden electoral choices through education and direct positive action. As a 501(c)(3) non-profit, non-partisan organization, Free and Equal leads national, state and local efforts to open the electoral process in the United States by hosting all-inclusive gubernatorial, Presidential and senatorial debates; organizes Electoral Reform Symposiums; produces United We Stand concert events; supports individuals running for office; and is building a Blockchain Election Assistant App to promote transparency and empower voters with information about all their individual candidate choices.

About United We Stand Concerts

The United We Stand Concert series, created by Free and Equal Elections Foundation, is a solution-based music festival and tour designed to connect students and youth with the thought leaders and musicians of our time to awaken political and cultural change.