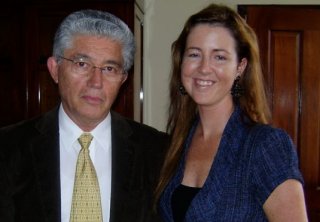 Posted at 22:59h in Videos by admin 0 Comments
0 Likes
Share

MILL VALLEY, Calif. – Christina Tobin, founder and chair of The Free and Equal Elections Foundation, today announced details of her meeting with Costa Rica Vice President Alfio Piva and Founder and President of Costa Rica Libertarian Party (Partido Movimiento Libertario) Otto Guevara. Tobin also announced she will host a press conference, Thursday, September 9, 2010, in Seattle.Tobin met with Vice President Piva for over an hour, Monday, August 30, to discuss electoral reform, proportional representation, marijuana legalization and war. The two also discussed the recent deployment of U.S. Marines to Costa Rica, where Tobin was told the United States is paying Costa Rica $300,000 per month to have U.S. troops present in the country. In addition, Tobin and Piva talked about the dangers of a top two primary system, which threatens to spread from California across the United States.

In a separate meeting, Saturday, September 6, Guevara discussed with Tobin details of the relations between the United States and Costa Rica. The 10-year agreement involving the occupation of 7,000 U.S. Marines was signed by former Costa Rica President Oscar Arias, who is reported to have close ties to the Obama administration, not the current President Laura Chinchilla. According to Guevara, if Costa Rica legalizes marijuana, the United States would stop sending funding and cut off agricultural exports to the United States. At the end of the recorded meeting, Guevara endorsed all electoral reform initiatives that Free and Equal pursues in the 50 states. A recording of the meeting will be available soon.

“America needs to take the lead in marijuana legalization,” said Gerald Murray, national youth coordinator for Laura Chinchilla’s 2010 presidential campaign. “If Costa Rica were to legalize it before the United States, we would risk losing a large part of our economy, the agricultural products that we export to the U.S.”

“It’s despicable that the United States has such ‘authority’ over a sovereign nation such as Costa Rica,” Tobin said. “There’s a lot we can learn from Costa Rica, nonetheless the U.S. government continues to bully other countries to achieve its objectives, a hopelessly undemocratic tactic to international policy.”

Tobin also was scheduled to meet with President Laura Chinchilla while in Costa Rica, however the meeting has been rescheduled for later this year due to a last-minute conflict.

Tobin will give a press conference in Seattle, Thursday, September 9, 1 pm to 2:30 pm. In addition to Tobin, Donovan Rivers, Washington Democratic candidate for Congress; John Davis, a Hempfest chief; Rachel Hawkridge, chair of the Libertarian Party of Washington; Linde Knighton, chair of the Progressive Party of Washington; and Gentry Lang, political activist for voting reform, are slated to speak at the press conference. Topics will include: Top Two election systems, proportional representation, election fraud, all inclusive debates, the war on drugs, and war. While in Seattle, Tobin will attend Marc Emery’s sentencing hearing, scheduled for Friday, September 10, 1 pm to 3 pm. All events will be at the South steps of the Federal Courthouse, located at 700 Steward St., Seattle, Wash.