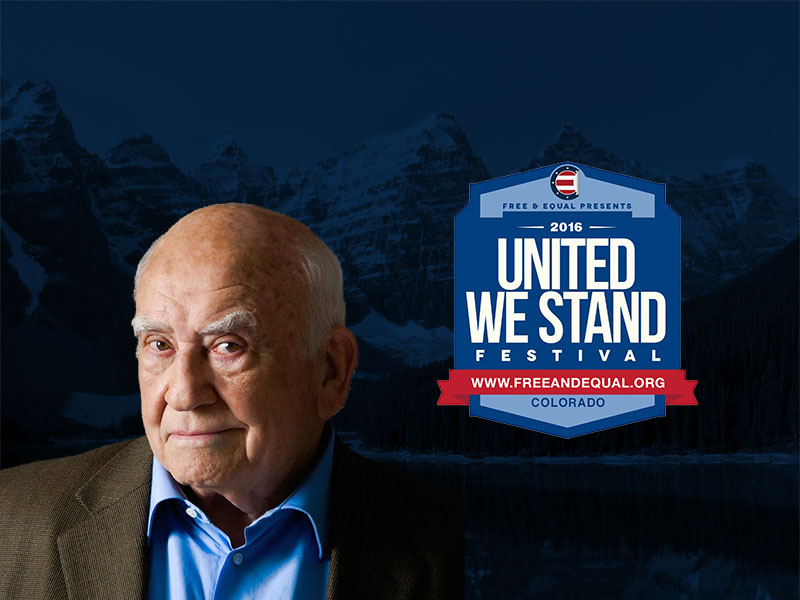 Festival Starts @ 4:00 pm – All Will Be Live Streamed at www.freeandequal.org

BOULDER, Colorado, October 24, 2016 – Iconic actor Ed Asner, known for receiving a record number of Emmy Awards, will moderate Free and Equal Election Foundation‘s Presidential Debate for the People tomorrow night beginning at 7:00 PM MT at Macky Auditorium on CU campus in Boulder.  The discussion will be held as part of the organization’s commitment to broaden electoral choices through education and direct positive action and to reinforce the motto: “More Voices, More Choices.” The combined livestream/media reach for the event is 150 million people. Tickets are free and are open to the public.

The debate is the highlight of the  United We Stand Festival (UWS Fest) that will feature a host of speakers and performances by musicians including Ky-Mani Marley, Flobots, former Attorney General Ramsey Clark, Spragga Benz, Earth Guardians and much more.  The presidential debate will begin with a keynote address from Kweku Mandela, grandson of the late Nelson Mandela. The discussion is especially relevant this election cycle when there seems to be a growing opposition to establishment politics.

The debate is unique in that Free and Equal invites all candidates who gain ballot access in enough states to reach 15% of the electoral vote. To date, “Rocky” Roque De La Fuente (the Reform Party’s and the American Delta Party’s nominee), Darrell Castle (Constitution Party), and Gloria LaRiva (Party for Socialism and Liberation) have confirmed. All candidates have been invited.

Most people are unaware that Clinton and Trump are contractually precluded from participating in any debate that is not run by the Commission on Presidential Debates; a commission that is ruled by the DNC and RNC, which is why it is almost impossible for other candidates to appear in one of those forums. That is exactly why Free and Equal created the concept of an open presidential debate and held them in 2008 and 2012.

Christina Tobin, Founder and Chair of Free and Equal, said, “Ed Asner is a legend; not only a brilliant actor with all of the Emmys he has won but mainly for all of  his work promoting the causes and issues he believes in.”

“We think that every credible candidate should be invited to debate the issues,” continued Tobin. That is why we created the Presidential Debate for the People in 2012 and are proud to continue that tradition this year.”

For more details, email PR Manager for Free and Equal, Lauren Brillante, at lauren@freeandequal.org or phone (303) 586-1577.